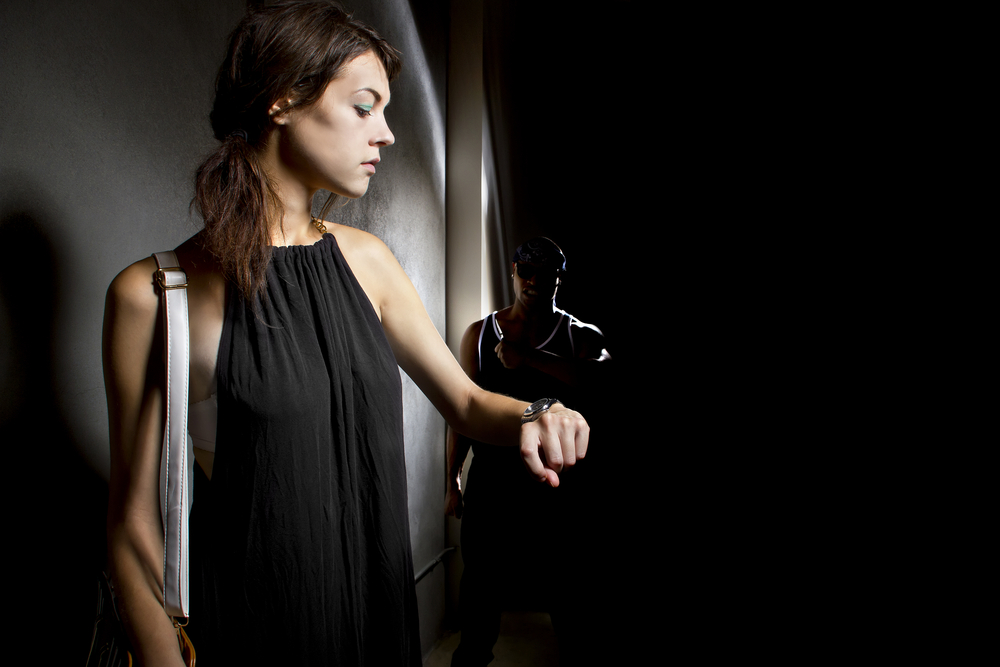 Stalking is when someone causes emotional distress to someone by following them against their will, showing up at places without a reason, making unwanted phone calls, sending unwanted messages/emails, spreading rumors, or posting personal information on social media. The person who does these activities is called a Stalker.

The victim might feel fear of life, safety, or safety of someone else. According to the Supplemental Victimization Survey (SVS), if you experienced any one of the above-mentioned behaviors on at least two separate occasions, you are a stalking victim. Most of the time, your stalker will be someone you know or someone with whom you have had an intimate relationship in the past.

Some important facts on Stalkers

National Intimate Partner and Sexual Violence Survey (NISVS) says, 1 out of 6 women and 1 out of 17 men have experienced stalking in their lives. Around 7.5 million people are stalked in the United States every year. More than 85% of the stalking is done by the people known by the victim. 61% of the female victims and 44% of the male victims are stalked by someone who has been there intimate partners in the past.

Online stalking or cyberstalking means snatching someone’s privacy by invading their personal profiles without their knowledge or consent. As offline stalkers try to confront their victims in real life, an online stalker hides behind the curtains of the internet to stalk his victim. Online stalkers may use social media platforms like Facebook, E-mail, or forums to approach their victim.

The mind of a Stalker

Rebecca Schaeffer, who was a successful television actress was shot dead in 1989 at the age of 21 by a out-of-his-mind fan. Later it turned out he has been stalking her for a long time. So, what motivates a stalker to go to such extents in the first place? Not an easy thing to answer. But we have information for you, of course. Let’s look at some factors which can motivate a person to be a stalker:

Now as you have learned enough about what stalkers are, what are their types, and what are their motivations, it’s a good time to learn some tips to intervene stalkers, both offline and online. So stay with us and read on, here are some tips for you to stop stalkers from harassing you:

If you are planning to take legal actions against a stalker, be sure to collect as much evidence as possible. You can secretly capture photos or videos of the offline stalkers while they are making you uncomfortable. Collecting evidence against an online stalker is easier, keep backup or screenshots of the messages or emails they send you and you’re good to go.

While trying to digest the information given above, you might have developed certain questions in your mind regarding stalkers. You’re not alone. Literally, almost everyone would develop these questions. Looking for answers? Not a problem! Read up and you’ll find answers to the majority of your common question about stalkers and online stalkers.

How do I found out who stalks my profile on Facebook?

Facebook is the biggest social media platform there is, with over 1.69 billion users as of January 2020. It’s also the first pick of an online stalker for stalking you on the internet. Let’s face the truth, in the modern world of the 21st century, it’s hard to find someone who doesn’t have a Facebook profile. That’s why an online stalker heads towards Facebook first of all. With that in mind, here are some tips for you to find out if someone is obsessed with monitoring you on Facebook:

Check notifications of your old posts: There’s a high possibility that when someone checks out your profile on Facebook, they might keep scrolling down and down and end up on your 3 years old photos. While checking out these photos, they might accidentally like a photo or tag themselves in the photo. As a result, you’ll receive a push notification notifying you about the like or tag.

Keep an eye out for new profiles of blocked people: There could be several reasons for you to block someone on Facebook. They might be sending you unwanted messages, tagging you in unwanted posts, or making you uncomfortable by any other means. If that blocked person reappears on Facebook after you have blocked them, there’s a possibility they are here to stalk you.

What age group has the highest prevalence of stalking?

To put it simple and straight, people aged between 18 and 24 are the most vulnerable to stalkers.

What does it mean to stalk someone on Facebook?

Do people know if I look at their Instagram?

If you’re an active user on Instagram, you might be wondering if it’s possible for the people you visit on Instagram to find out that you’re checking out their profiles. That’s a complicated question with a complicated answer, but don’t worry, you’re not leaving without getting your question answered. Let’s look at each type of post possible on Instagram separately and see if people can know if you looked at them.

Instagram photos: It’s absolutely not possible to find out if someone has looked at your Instagram photos. So, if you have been checking out someone’s images from last week’s vacations on Instagram, they will never know.

Instagram stories: This is where things start to get a little different. Instagram stories feature was a massive hit upon release. Just within 2 months of its release, this feature achieved over 100 million active daily users. One of the reasons for its popularity is, of course, the ability to check out who actually looked at your stories. The person who posts the story can see the list of people who have watched their stories. So, beware. People will know if you look at their Instagram stories.

Can someone know if I stalk them on Instagram?

For the most part, there’s no straightforward answer to this question as well. However, let us explain. A person has no direct method of checking if you are stalking their profile. But there might be a couple of ways:

Third-party tools: If the other person is using a third-party tool to monitor the activities on their profile, they will find out you’re stalking them. One of the most popular ones of such tools is called “Followers Plus for Instagram”. This app collects many of the statistics related to one’s Instagram profile, including who stalks them the most.

Some years ago, an image surfaced on the internet and went viral in a speedy manner. The text in the image promised to disclose your biggest stalkers to you just by a simple trick. This “trick” was performed by viewing the source code of the Facebook website in a browser and then searching for the keyword “initialchatfriendslist”. A set of numbers would appear and you had to copy and paste the numbers in the Facebook website URL like “facebook.com/numbers”. It was said that the list of the people who appeared were the people who visit your profile the most.

But later, that turned out to be absolutely wrong. A Facebook spokesperson said “It is the initial order of friends displayed on the right-hand side chat bar when the page is loaded. We rank this list based on who you are most likely to message; we determine the order of friends based on a number of factors”. As interesting as it sounds, this myth was eradicated at the same pace as it appeared.

Hold on, another complicated answer on the way. Social media companies, especially Facebook, don’t disclose this kind of information for privacy and data breach reasons. For the same reason, it’s not possible to see who visits your Facebook page. But there’s a catch, let’s discuss.

Who viewed my profile picture on WhatsApp?

The simple answer is; you cannot find out who viewed your profile picture on WhatsApp. WhatsApp application on Android and iOS has no such built-in feature to give out that kind of statistics. It also doesn’t give any permissions publically through which other applications could find this information. CWP

link to Bad Neighbors
When we walk outside our house or apartment, and we see the person who lives across from us or who lives parallel to us or just in are lane are called neighbors. It is a widely used term and a word that the majority of us are familiar with. A neighbor can evoke multiple sentiments […]
Continue Reading
link to Community
What Is The True Meaning Of Community? It is easy to say “Community,” but is it easy to act upon it? Even the word alone reflects a lot of sense, and you don’t need to dig deep to find out what it means, as it is simply an alternative for togetherness. A community can be […]
Continue Reading

John Young was a police officer for 38 years and William Smithson was a security patrol office for 30 years. They wanted to find ways to continue helping communities stay safe after they retired. They noticed that many people had great concern about crime around their neighborhood and family safety.

Both had spent a lot of time working with Neighborhood Community Watch programs, studying ways to make them work better. In 2011 they along with some concern friends with experience in criminology put together Community Watch Paper to bring additional information to people with neighborhood community safety concerns.